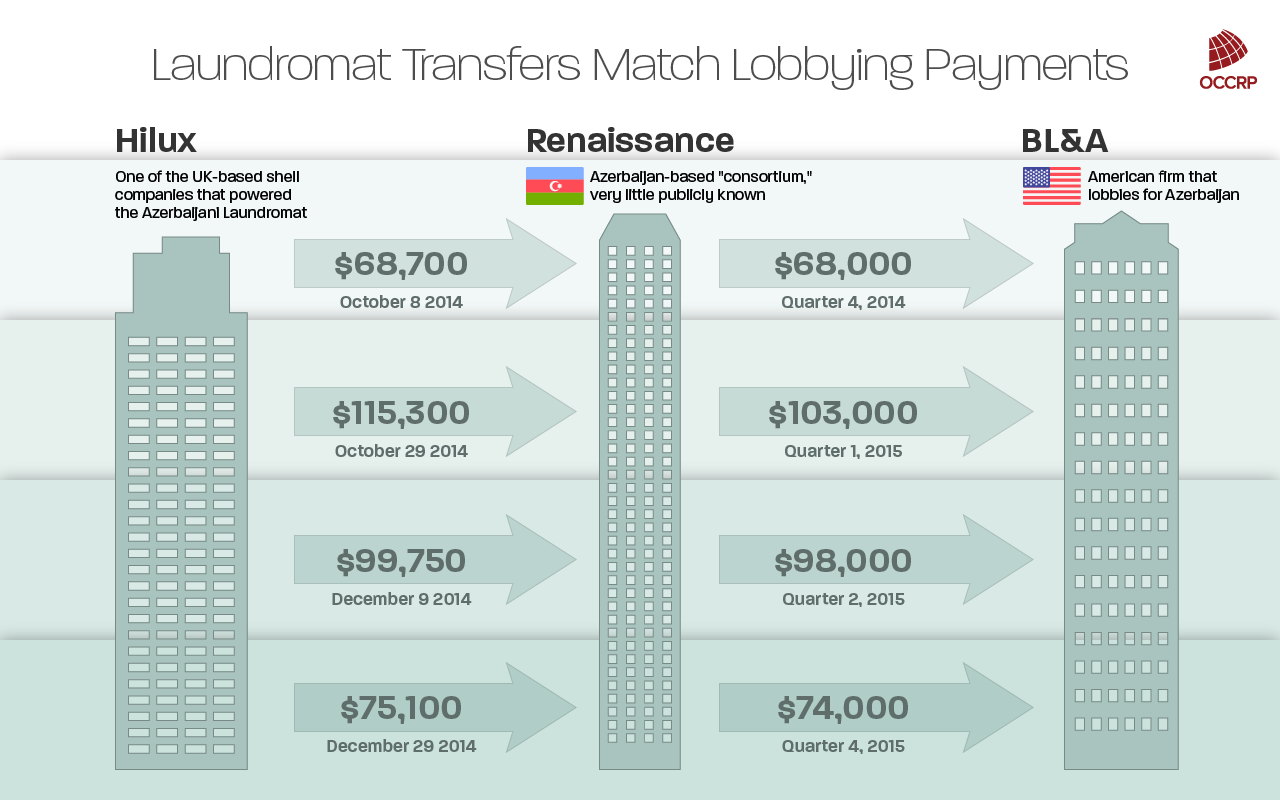 Investigative journalist Jonny Wrate reported on May 23, 2018 that “some of the money that passed through the Azerbaijani Laundromat, a secret money laundering scheme and slush fund that saw $2.9 billion flow out of the country between 2012 and 2014, ended up in the hands of a purportedly private Azerbaijani organization that hired a Virginia firm to lobby the US government for more than a decade.”

OCCRP had reported earlier that “other monies from the fund were used to advance the Azerbaijani government’s political agenda, with some ending up in bank accounts belonging to European politicians who spoke highly of President Ilham Aliyev’s regime even as it arrested journalists and political activists. The precise origins of the funds are unknown, hidden behind secretive shell companies. But there is ample evidence that the authoritarian country’s ruling elite is behind them.”

Last week, OCCRP revealed that two shell companies established by Azerbaijan “funneled over a million and a half dollars to a mysterious Baku-based organization called Renaissance Associates” which in turn hired “a US lobbying firm to orchestrate praise for Azerbaijan and had its representatives make thousands of dollars in campaign donations, including to Senators and Representatives who sat on committees that determine foreign aid budgets.”

At the center of this scheme is Elkhan Suleymanov who “runs a pro-regime organization in Baku which appears to work hand-in-hand with Renaissance, even using the same office space…. Other payments were made to an influential oil and gas consultant with close ties to President Aliyev who presents himself as an immigration success story and lives in Dayton Ohio -- even as he also lobbies the US government on his homeland’s behalf.”

Since 2004, BL&A has handled the visit of Pres. Ilham Aliyev to the White House and three years later arranged for Pres. Obama’s former campaign manager, David Plouffe, to visit Baku and meet with Azeri officials. BL&A has also lobbied for US Defense appropriations to Azerbaijan, against Karabagh (Artsakh), and for the oil pipeline from Azerbaijan to Turkey. Between 2008 and 2016, BL&A president Bob Lawrence has testified before the House Appropriations Subcommittee on State, Foreign Operations and Related Matters, recommending foreign aid to Azerbaijan. In his testimony, Lawrence called Armenia “a rogue nation… clearly protecting criminals” and that it commits human rights violations.

US Justice Department reports indicate that BL&A paid $250,000 in 2015 to hire the Crane Group to lobby on behalf of Azerbaijan. At the same time, BL&A contracted former Cong. Solomon Ortiz (D-TX) and his firm, Solomon P. Ortiz Holdings LLC, to lobby for the interests of Azerbaijan.

OCCRP also reported that “between 2012 and 2015, individuals registered as lobbyists acting directly or indirectly on behalf of Renaissance made thousands of dollars in donations to political candidates, including to Senators and Representatives who were sitting on, or chaired, appropriations subcommittees at the time.”

Furthermore, “between at least 2006 and 2008, BL&A’s website listed the country of Azerbaijan, rather than Renaissance, as its client. In May 2012, BL&A agreed to represent the Embassy of Azerbaijan and disclosed this under FARA [Foreign Agents Registration Act] before quickly annulling the registration, claiming that no services had actually been performed and no payments received.”

BL&A acknowledges on its website that it collaborates with the Association for Civil Society Development in Azerbaijan (ACSDA), a pro-regime non-profit organization based in Baku and controlled by Elkhan Suleymanov, a member of Azerbaijan’s parliament. According to BL&A’s website, Renaissance “supports and nurtures ACSDA. The two organizations share the same Baku apartment.” OCCRP also reported that “when in April 2016, ACSDA signed a three-month contract with US lobbying firm Greenberg Traurig, the firm’s FARA filing shows that the $25,000 per month fees had been paid by Renaissance.”

OCCRP’s extensive report revealed many other lobbying activities funded by this secret slush fund. All these efforts should be reported to the US Congress asking for a thorough investigation. A lawsuit should also be filed against BL&A to block its unregistered lobbying campaigns!