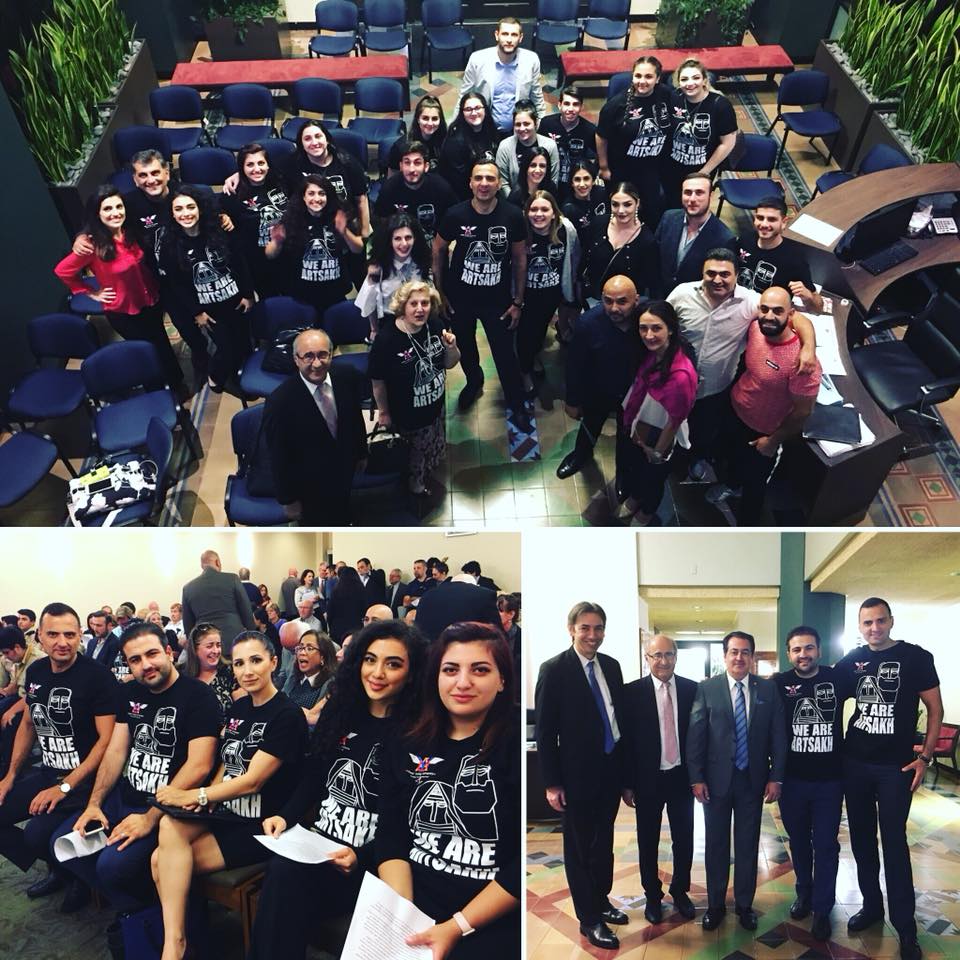 Hundreds of supporters, Armenian-Americans and non-Armenians, packed the Glendale City Council chambers until past midnight to first-hand witness this historic moment and to ensure that the voice of the Community is heard by their elected representatives.
“As a lifelong Glendale resident, I'm absolutely honored to have the opportunity to speak on behalf of my Armenian friends and neighbors, as well as the entire city,” said Edgar Gonzalez at the City Council meeting. “The city has been enriched with the beautiful Armenian culture and changing the name of two city blocks to commemorate their heritage, I see as simply a small gesture.”

This latest vote is yet another victory for the brave and independent people and Republic of Artsakh, and the Armenian-Americans as the Glendale City Council casted its vote against the backdrop of millions of dollars of Azerbaijani lobbying efforts in the US, at the federal, state, and even local levels.

In 2010, due to the Azerbaijan’s continuous commission of war crimes against unarmed Armenian population of Artsakh, including the cross-border shooting of Armenian women and children using Azeri snipers, and as a result of Aliyev regime’s rapid military buildup using its newly acquired petrodollars, the Unified Young Armenians launched the “Information War,” a campaign to bring awareness to the urgency of the need for the recognition of Artsakh Republic by the international community. Within the scope of this campaign, on August 17, 2013, Unified Young Armenians’ representatives, Aroutin Hartounian, Vilen Khachatryan, and Milena Mailyan met with the then California Assemblyman and Appropriations Committee Chairman Mike Gatto, officially requesting him to lead the fight for recognition of Artsakh by spearheading the recognition efforts in California legislature. For this purpose, the Unified Young Armenians drafted and submitted a resolution for the then Assemblyman Gatto’s consideration. On January 6, 2014, Assemblyman Gatto introduced the abovementioned resolution in California Assembly, leading to the Assembly Joint Resolution No. 32 being approved by California Governor Jerry Brown on September 11, 2014. The resolution encouraged and supported the Nagorno-Karabakh Republic’s continuing efforts to develop as a free and independent nation, and urged the President and Congress of the United States to support the self-determination and democratic independence of the Nagorno-Karabakh (Artsakh) Republic and its constructive involvement with the international community’s efforts to reach a just and lasting solution to security issues in that strategically important region.

Background on Street Renaming:
In 2015, the Unified Young Armenians (UYA) identified the need for an Artsakh Street/Avenue in the City of Glendale. On April 23, 2017, UYA first put forth the request, this time publicly, to the City Council at the Armenian Genocide commemoration candlelight vigil at the Glendale City Hall. On March 13, 2018, the City Council had unanimously had voted to approve the process of renaming streets in the City of Glendale, as well as providing the City staff with directions to rename two blocks of Maryland Avenue stretching from Wilson Avenue to Harvard Street into Artsakh Avenue.

Unified Young Armenians (UYA), is an independent organization made up of a young cadre of young and professional Armenians. The Organization aims to give young Armenians a voice in the current affairs by organizing them into an efficient and capable force for positive change.