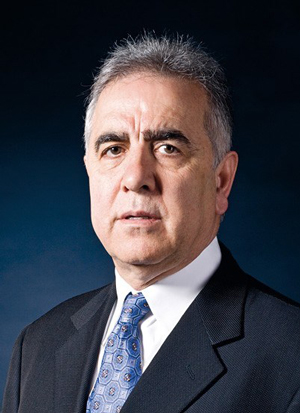 Turkish and Azeri circles were displeased with my latest column where I had analyzed Vice President-elect Mike Pence’s phone call to Armenia’s President Serzh Sargsyan.

Azerbaijan’s Trend news agency published a ridiculous article by Elmira Tariverdiyeva, titled: “Yerevan’s failed phone call or why Trump did not respond.” She is the head of Trend’s Russian-language news service.

The Azeri article is replete with nonsensical and false assertions. The author, who has a limited knowledge of American politics, calls the Pence-Sargsyan phone calls a “disaster.” She wrongly claims that Pence simply returned Sargsyan’s phone call. In fact, it was Vice President-elect Pence who made the call to Pres. Sargsyan.

The real disaster is that the President of filthy rich Azerbaijan, Aliyev, would have been unable to talk to Pres.-elect Trump or Vice President-elect Pence without the assistance of highly-paid lobbyists in Washington!

The Azeri journalist goes on to make bigger gaffes by claiming that Hillary Clinton’s defeat “was a big disappointment for Yerevan. It is known that Clinton maintained fairly close relationships with an extensive Armenian diaspora in the US.” Elmira does not seem to know much about either Armenia or the Diaspora. Contrary to her false assertion, most Armenians did not support Clinton!

Tariverdiyeva also claims that Yerevan is frustrated because Trump is more familiar with Azerbaijan based on his investments in that country. In my opinion, it is too premature to make such self-serving and unwarranted assumptions. On the contrary, Pres. Trump has many reasons to be tough on Azerbaijan given its dictatorial regime, serious violations of human rights, and the participation of many Azeris in ranks of ISIS terrorists in Syria. It is ridiculous to claim that Pres. Trump would be more favorably inclined toward Azerbaijan because of his $323,150 licensing fee from the Baku Trump Tower, which he does not own!

Another more sinister article was written by Alexander Murinson, who is neither Azeri nor Turk, but for some questionable reason, has written a series of anti-Armenian tirades over the years in various publications. In his LinkedIn page, Murinson describes himself as: “Currently seeking new [job] opportunities…. An expert on Azerbaijan-Turkish-Israeli cooperation…. Considered a leading expert on Azerbaijani Jewry.” Murinson serves on the faculty of an obscure school in Washington, D.C., “BAU (Bahcheshehir) International University,” recently founded by Turkish billionaire Enver Yucel.

In an attempt to seek new job opportunities and ensure that his article titled, “The Armenian Lobby’s Tenuous Relations with President-elect Trump,” is published, Murinson panders to the right-wing website The American Spectator, under the false premise that Armenians are anti-Trump, therefore, anti-conservative.

I had planned to rebut point by point Murinson’s statements, but decided to let his own words expose his faulty judgments. Here are some of his nonsensical gems:

-- American “Armenian lobby’s agenda is largely contrary to U.S. national interests and, perhaps counter-intuitively, to the best interests of the Republic of Armenia….”

-- “Turkey [is] a key and indispensable strategic ally of the U.S. in the Middle East….”

-- “This may lay at the core of the deep concern and disappointment of the U.S. Armenian lobby with the election of Donald Trump as President. For observers of the region, the nasty anti-Trump campaign executed by Armenian-American activists is no secret. The online campaign proudly announced that Armenian pop stars Cher and Kim Kardashian are ‘pulling all stops’ against Trump, while a noted pro-Armenian celebrity Amal Clooney, whose odd list of clients once included Armenia’s government and Julian Assange, led the anti-Trump effort along with her husband George.”

-- “The Armenian concern seems to stem from the fact that Donald Trump is not beholden to Washington’s typical web of special interest groups. He might pursue a more clear-eyed approach to the region, basing it on America’s national interest rather than the interests of a particular lobby. He might even take a sober look at the oversold notion of Armenian political influence in the U.S. and notice its increasingly obvious irrelevance.”

-- “The next Secretary of State should be different from the once pro-Armenian Massachusetts Senator John Kerry, who favored his Armenian friends….”

In view of such persistent attacks, Armenian-American political organizations should forcefully counter all deceitful and defamatory articles written by the likes of Elmira Tariverdiyeva and Alexander Murinson. It is high time to establish an Armenian Anti-Defamation Committee!